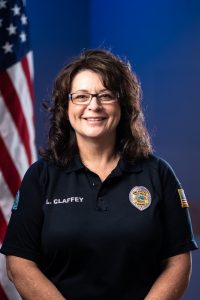 Laura Claffey began dispatching for the Post Falls Police Department as an Emergency Communications Officer (ECO) in April of 1990. For eleven years, Laura served our community and Department as an ECO. After a one-year furlough, when she moved to Sandpoint, Laura returned to Post Falls Police for five more years as Management Assistant to former Chief of Police, Cliff Hayes.

In February 2006, Laura left the Department to become more involved in her Sandpoint community and to explore other vocations. Laura worked as a dog groomer, construction site assistant, and a medication specialist for Bonner County’s Veterans and Indigent Services. Laura returned to Emergency Communications in September 2008, working for Bonner County 911. She advanced to ECO Assistant Supervisor six months later. In April of 2010, Laura learned of a Communications position available in Post Falls, and after applying, was rehired, nearly twenty years to the day when she first started her career with the Post Falls Police Department. She’s been employed with the Department for nearly 21 years total, resuming the position as the Management Assistant in October 2015.

Laura’s many skills, seasoned experience, and passion makes her a valuable asset to the PFPD. Laura is enjoying her re-employment with the Department and anticipates serving the citizens of Post Falls for several more years.