The Post Falls Police Department has been on the Internet for over 15 years. 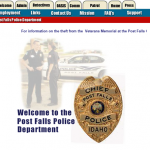 Our first website went online in the Fall of 2001. Post Falls was one of the first police departments in the country to "get online."

We  provided information about the department online not only for the citizens of Post Falls, but also provided updates to the media. We used the site to help inform and as a useful tool to help solve crimes in the local community.

Post Falls Police maintains a highly-active Facebook social networking page. Officially launched in 2013, we have over 10,000 followers with the number of other Facebook users exposed to our content growing weekly. It began as an effective way to inform citizens about upcoming events and general public safety information. We’ve been able to do that and much more through Facebook.

The immediate, wide-spread community outreach provided by social media has helped our department solve crimes, locate runaways and missing persons, reunite lost pets with their owners, warn about traffic accidents and delays, educate about programs and services, and offer insight into the daily operations of law enforcement. Whenever possible, we include pictures or video to our posts.

In 2014, we started a regular post known as the Shift Log. The log is a list of short descriptions about notable calls for service that our dispatchers and patrol units responded to during their day, swing, and graveyard shifts. It has become one of our most well-received online interactions with the community.

Also new in 2014, our Virtual Patrol Ride-Along with Chief Haug. We hosted three virtual ride-alongs via our Facebook, Twitter, and Instagram accounts. Riding in Chief Haug’s patrol car, a police volunteer posted messages, photos, and videos related to real-time calls for service and incidents that patrol officers responded to during the ride-along. The New Year’s Eve virtual ride-along attracted more the 2,000 followers from around the world.

With our Facebook follower’s help, detectives solved several notable crimes after we posted requests for tips and

information from the community. In May, we posted a surveillance photo of a bank robbery suspect. We received several tips. Less than four hours after the incident, Post Falls Police had the suspect in custody, and he was later charged with the crime.

We will continue to grow and enhance the department’s online presence, building strong relationships with citizens as we join together in our commitment to keeping Post Falls safe.

This message is only visible to admins.
Problem displaying Facebook posts. Backup cache in use.
Click to show error
Error: Error validating access token: The session has been invalidated because the user changed their password or Facebook has changed the session for security reasons. Type: OAuthException