Traffic officers primarily respond to vehicle crashes, including hit-and-run accidents, and they investigate as needed. They also assist with special traffic enforcement's and educate drivers about state traffic laws and city ordinances. The Traffic officers include Patrol Officer Evann Flanagan, Ryan Dalke, and Cody Childers, who are supervised by Sergeant Kirk Rosenau.

From spring through fall, Officer Flanagan patrols on a motorcycle. He performs traffic enforcement duties while riding a 2010 Kawasaki Concour equipped with a computer, e-citation scanner and printer, mounted radar detector, and handheld lidar detector. This technology allows the officer to work efficiently, providing access to the same technology and information also available in the patrol vehicles.

In 2019 we implemented a new Traffic position which was filled by Officer Cody Childers.  This Traffic position was a DUI car.  Officer Childer's works mainly during the evening hours to handle traffic calls and mainly Driving Under the Influence calls.  Officer Childer's handles multiple DUIs in a months’ time.  The goal of this added position is to educate the public about DUIs and to curtail the amount of DUIs during each month.

In 2019, our motors patrol will participate in several events, including our Cops-n-Kids & Rodders-n-More Open House and SkyFest 2019 at Fairchild Air Force Base in Airway Heights, Washington.

Post Falls Police Department’s Bike Patrol Team started in June 2013. Specially-assigned and trained officers mount a bicycle to the back of their patrol vehicles. They can rapidly deploy into any area of the city at the officer’s discretion or as needed. This makes our bicycle patrol unique. Most traditional bicycle patrols remain exclusively in one location, such as a downtown area.

Our Bike Patrol Teams begin deploying the bicycles early in the spring, through summer, and often ride late into the fall season. Citizens often express their appreciation to see officers riding around in high-crime areas. Bike Patrol Teams can often be found patrolling the City’s many parks, other high pedestrian traffic areas such as the Centennial Trail, and locations which are prone to higher incidents of property crime.

Bike Patrol Teams have participated in numerous community events, often initiate traffic stops and pedestrian checks, and have been successful in deterring crime and apprehending criminals throughout our city. 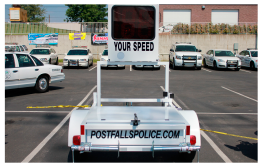 The department purchased a new speed measuring device by Jamar Technologies, Inc. The unit allows officers to quickly and easily analyze data and produce comprehensive traffic reports. We will position the speed measuring device in areas with traffic complaints and check it routinely via Bluetooth wireless technology. The unit prints reports containing dates and times of traffic volumes and concerns, which is a useful tool in solving some of our city’s traffic issues.