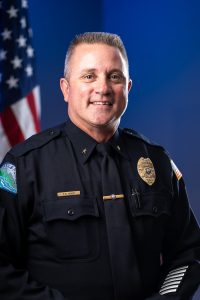 Chief Pat Knight serves as the Police Chief. Pat has more than two decades of law enforcement experience and oversees a department that employs 72 sworn officers and civilian personnel, as well as 14 volunteers.

Chief Knight proudly served his country as a member of the United States Marine Corps from 1990 to 1994. He then returned home to North Idaho to begin his professional career in law enforcement. He worked for a short period of time with the Kootenai County Sheriff’s Office as a Marine Deputy until being hired by the Post Falls Police Department full time as a patrol officer in July of 1994. Since that time he has served in many different capacities within the Department. In 2018 he was appointed Chief of Police. Chief Knight takes over an agency that is extremely committed to Community Involvement and relationship building, with the ultimate goal of building a stronger community through partnerships. Chief Knight has a firm believe that his team takes an “All In” approach to service and dedication to the community of Post Falls.

Chief Knight is a proud graduate of the FBI National Academy, Session #255 and is extremely humbled and honored to have been chosen to lead such a fine team and being a partner of an exceptional community.